Update: The configuration process described in this post can be achieved with only one management command if you install the django-windows-tools application.

Windows is probably not the best production environment for Django but sometimes one doesn’t have the choice. In that case, a few options aleardy exist, most notably the one developed by helicontech that relies on Microsoft’s Web Platform Installer. This solution, which is described here, relies on the installation of a specific native Handler developed by Helicontech.

This handler manages the communication between IIS and the Django application through the FastCGI protocol with the help of a little python script that bridges FastCGI to WSGI. This script is derived from the Allan Saddi flup package that is already used by Django in the manage.py runfcgi command. The flup package doesn’t work under Windows and Helicontech has made the necessary adaptations to make it work with its handler.

Since its version 7, IIS does however support FastCGI natively, so the use of a specific handler to support Django is not needed. This post describes how to configure and run a Django application with the native FastCGI IIS handler. For that, I have myself adapted the Helicontech FastCGI to WSGI script to make it a Django management command.

But before that, to run Django you will need to have python on your server. If like me for some reason it is uneasy for you to run a software installer on your server, a good choice is to use Portable Python. With it, you can install and configure your python environment on your development or staging server and install it in your production server(s) by just copying over the python folder. You can even have different python environments with differents configurations on the same server. To use the portable python installation in copied in d:\python from a command line window, juste type:

And then python and its commands are available from the command line: 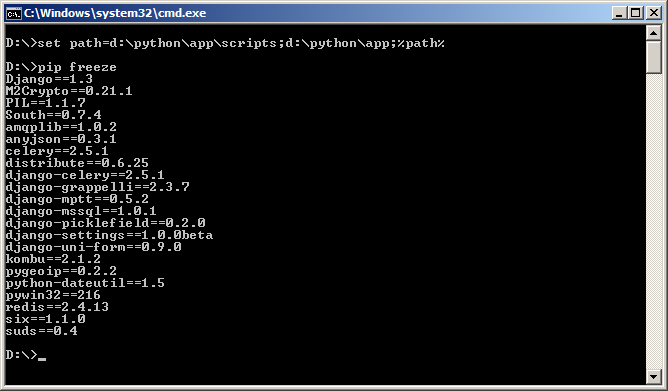 Another advantage of Portable Python is that it comes already bundled with The Python for Windows extensions (a.k.a. pywin32) and Django.

Adding FastCGI to the project

In our example, the Django project will be named esplayer and will be installed in d:\sites\esplayer. Please note that this configuration has been tested on Windows 2008 Server R2.

Take the fcgi.py file and copy it in the management\commands directory of one of your project applications so that the manage.py help fcgi command returns you:

Configure the FastCGI application on IIS

The next step is to configure the FastCGI Application on IIS. FastCGI is available whenever you have installed the CGI feature on your IIS installation. Run the server manager and go to the IIS role and configuration. Select your website. You should see a FastCGI Settings icon:

Double click on it and select the Add application action. Enter the following parameters: 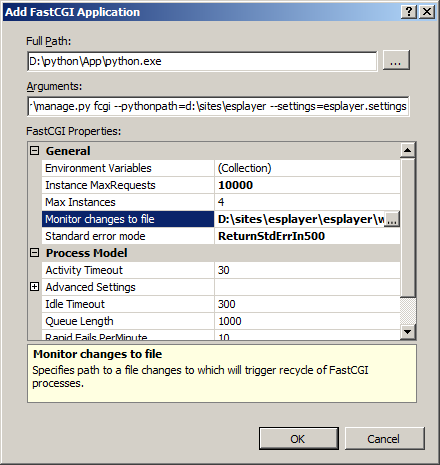 The other arguments are optional but you should review them to enter sensible values. The Monitor changes to file setting is particularly interesting. It will allow you to specify the path of a file that will trigger a restart of the application whenever it is modified. You can enter the path to the settings.py of your project. I personally prefer to specify a file that I explicitely update via a touch command.

Create the website and configure it to use the FastCGI application

Once we have our FastCGI application configured, we need a web site to make use of it. For it, we create a website pointing to our Django project:

To make the website use our FastCGI application, we create the following web.config file in the root of our project (here d:\sites\esplayer\esplayer):

We first clear all the request handlers and then specify that every request (path="*" and verb="*") should be managed by the FastCgiModule module. The scriptProcessor attribute reproduces the Full Path and the Arguments of our FastCGI application separated by |. It allows the module to identify the FastCGI application to which the requests will be routed.

In the local_static directory we put the following web.config file:

Which basically inverts the web.config file or the root of the project by clearing all the handlers and serving all requests only as static files. When collected, this file will go in the static directory and will instruct IIS that all requests below the path /static should be served as static files.

The website creation that is described in the previous sections can be automated with the following script that must be run as an administrator:

The four commands run in the script do the following actions:

After the configuration, the website should be available through IIS. If this is not the case, you will probably get a 500 Error: 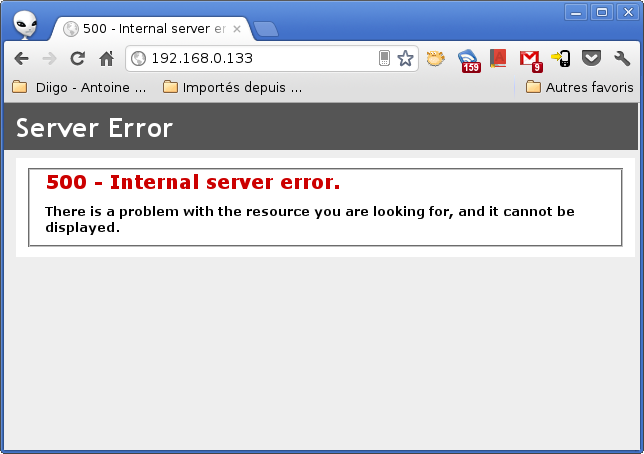 The first thing to do is to check that the website is available outside of IIS by running it with the command:

To troubleshoot further, the fcgi.py command provides several settings to be put in the settings.py file : FCGI_LOG (default False), when True, instructs the command to create a log file in the path pointed by FCGI_LOG_PATH. If FCGI_LOG_PATH is not defined, the log file will be created in the project root directory. The file name name pattern of the log file will be fcgi_AAMMDD_HHMMSS_XXXX.log, in which AAMMDD is the date, HHMMSS the time and XXXX the FastCGI application process number. If DEBUG is set to True in the settings, the log file will contain the Django debug logs. The FCGI_DEBUG setting (default False), when set to True, will output in the log file information about the FCGI protocol transfers between IIS and the Django application.

It is somewhat painful to have to specify the pythonpath and settings parameters both in the FastCGI configuration and in the web.config file. To avoid entering them each time, I have created a manage.py script in the scripts subdirectory of the project root that auto configures itself. Here is the source of the file:

With this script, the Arguments setting of the FastCGI application becomes d:\sites\esplayer\esplayer\scripts\manage.py fcgi and the scriptProcessor attribute in the web.config file becomes

However, the first creation and configuration could benefit from having some management commands dedicated to it. These would be part, along with the fcgi.py command, of a specific Django application that could be added to any project.

Furthermore, some of you may have noted that having the website point to the root of the Django project is not mandatory. Thus the Django project itself could be part of the python installation itself and deployed by running a Django management command.